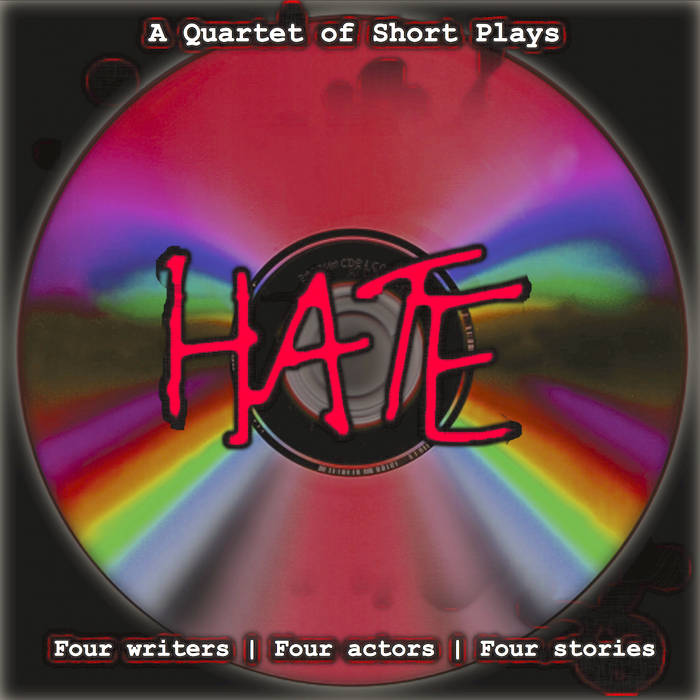 Hate Radio by Nick Myles
Welcome to the world of Dexter Amigo, a professionally loathsome talk radio ìshock jockî luxuriating in spitefulness and devoid of conscience.

Claws by Aaron Lamont
Always whining, always shitting, always pissing - what will John do with that fucking cat...?

You Horrid, Horrid Man by Penelope Faith
Actor Paul Dowell becomes the most hated man on television while playing the part of a villain in a soap. Playing a part, Paul, you're playing a part...

Vigilante by Guleraana Mir
Amina's sick of everyday racism and Islamophobia. She's got a plan that involves a mate, a costume and some dodgy accents. She's even planning on live streaming the whole thing. What could possibly go wrong?

N.B. THIS PRESENTATION INCLUDES LANGUAGE AND SEXUAL REFERENCES WHICH SOME LISTENERS MAY FIND OFFENSIVE.

Produced and Engineered by DAVID DARLINGTON and JOSEPH LIDSTER for WHAT NOISE PRODUCTIONS
Based on an original chat among David Darlington, Robert Dick, Joseph Lidster and Alan Flanagan
Additional Edit by Aaron Lamont
Additional Sound Design by David Nagel
Recorded in London, 2016
Thanks to Matthew Waterhouse

Twice published author - Hello, Mr Magpie (Flame 1999) and From A Past Life (Flame 2000) - Penelope Faith spent many years teaching creative writing and can proudly count published novelists among her past pupils. Now concentrating on drama, her plays have been performed in the theatre by The Pensive Federation, Kmbo Theatre and Made Up Theatre. Penelope has also written Dark Shadows and Doctor Who audio dramas for Big Finish.

Aaron Lamont is a Northern Irish writer known for his macabre sense of humour. His first full-length play, Safer, was produced at the Tristan Bates Theatre in 2010, and he has since contributed three audio dramas to Big Finish's Dark Shadows range.

Guleraana Mir holds an MA in Educational Theatre from New York University. Her short plays have been performed at numerous London fringe theatres such as Tristan Bates Theatre, Etcetera and Camden Peoples' Theatre as well as off-off broadway venues in New York city. Her full-length play Shooting Star was longlisted by the BBC as part of SCRIPTROOM 8. She also made the longlist for the TS Elliot Commission and Old Vic 12 with her new play Coconut, originally produced (as a short) as part of Ladylogue 2014 by The Thelmas. This is her first foray into audio drama.

Nick Myles studied Scriptwriting at City University, London (MA) and Directing at City Lit, London. As a director Nick has worked at Soho Theatre, Arcola, Lost Theatre, Camden People's Theatre and The Space. His plays have been performed at numerous venues including Arcola, Riverside Studios, Greenwich Theatre, Etcetera Theatre, Brockley Jack, Old Red Lion, and in 2012 his work made the finals of both RedFest and the Off Cut Festival. In 2015 Nick took Mistaken: A Quartet of Plays for One Actor (performed by William McGeough) to Edinburgh for 24 performances on the Festival Fringe (ì4/5 - Funny, tragic, moving and surprisingî ñ Three Weeks Edinburgh). He has also worked as a script reader for Writer's Avenue, Almost Random Theatre and The Space, and as a talent scout for BBC Writersroom. Twitter: @nickpmyles

Alexandra Donnachie trained as an actress and has worked professionally for four years; she has also tutored in LAMDA for the past five. Alexandra has appeared in productions at Hampstead Theatre and Warwick Arts Centre, and a number of immersive shows for young people with Battersea Arts Centre and the Royal & Derngate. She plays series regular, Jackie Tate in the award-nominated Dark Shadows audio series. She is working toward a Masters degree at the Royal Central School of Speech and Drama.

After a short career in law, Dilek Latif retrained as an actor. Since graduating she has appeared in various theatres including The Soho Theatre, Tristan Bates, The Landor. She has recently finished a Summer run with Secret theatre as The Nurse in Romeo and Juliet. Dilek is an Associate and Scratch Co-ordinator at The Jack Studio Theatre, where she has been involved in the casting and directing of their Write Now Festival since 2013 as well as organising Scratch Nights. She is artistic director to the Hibix Production Company.

Ross McNamara's audio work includes voiceovers for Terrence Higgins Trust and StreetWisdom. He also appeared in The Darkest Shadow and Bloodlust for Big Finish Productions. Theatre credits include Laertes in Hamlet for The Rose Bankside, Ferdinand in The Tempest with Treefolk Theatre, and Peter Quince in Midsummer for Stern Alarum. He recently filmed Faceblind for POB Productions. The Archivist was selected for LSFF in the thriller category, and The Gwillion for Lovecraft Film Festival.