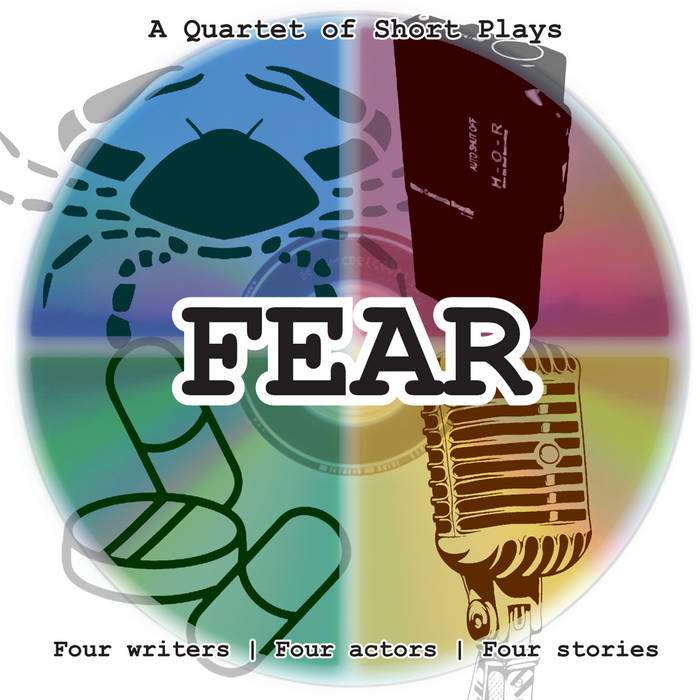 The Joy of Cancer
Robert has been diagnosed with testicular cancer but this isn't what scares him...

Tomorrow Will Be OK
People disappearing, libraries burned, extreme violence game shows... are you terrified? Never fear! Doctor Penny's self help group will make it all go away.

The Stranger Things That Happened
Fifteen year-old Maya starts to investigate the weird goings-on in her village, drawing with her her ageing dog, a Finnish exchange student and the Devon and Cornwall police. A tale of paranoia, suspicion and the teenage mind.

Cancellation
The stars of rural drama Bamberly Farm are about to find out that there are things much more terrifying than being off the air...

N.B. THIS PRESENTATION INCLUDES LANGUAGE AND SEXUAL REFERENCES WHICH SOME LISTENERS MAY FIND OFFENSIVE.

Produced and Engineered by DAVID DARLINGTON and JOSEPH LIDSTER for WHAT NOISE PRODUCTIONS
Based on an original chat among David Darlington, Joseph Lidster and Alan Flanagan
Recorded in London, 2014
Thanks to Cassandra Bond, Nigel Fairs, Robert Dick and Daryl Chapman

Alan Flanagan works as a script editor and writer on audio drama Dark Shadows, as well as writing for Big Finish's The Confessions Of Dorian Gray. His plays I Run I Sing I Swim Dive and Billy Redden won awards at the Dublin Gay Theatre Festival, and he was recently long-listed for the Old Vic 12, while short film The Red Line screened at the Cork and Calgary Film Festivals. He is currently developing television concept Shuffle with a US production company, and new sci-fi feature script Pindrop. He lectures screenwriting at Brighton University, and can be found on Twitter at @alanflanagan

Anna Forsyth has staged two of her shows at the Edinburgh Fringe and one at the Camden Fringe with her theatre company Up In The Gods. More recently, her work has been at the Tristan Bates theatre (Significant Other festival) as well as Friend of a Friend Theatre and Stitchin’ Fiction new writing nights. She has completed her MA in Scriptwriting at Goldsmiths and has won two screenwriting awards in the United States, as well as a BBC award for radio drama and the LOST Theatre Festival. Her short story When I Remember Pablo is part of Mardibooks’ e-collection Jam.

Serena Haywood is a playwright whose work has featured at theatres including The Brockley Jack, Tristan Bates, Park Theatre, Theatre 503 and The Canal Cafe. She is also a Creative Director and Producer at The Pensive Federation and Tangerine Theatre Companies and Associate Artist of women's theatre group The Thelmas. She founded and co hosts The South London Women (BAME) Writers' Group. Her website is serenahaywood.com and Twitters as @SerenaHaywood

Joseph Lidster has has written scripts for radio and television, including episodes of Torchwood, The Sarah Jane Adventures, Wizards Vs. Aliens, Hetty Feather and Millie: Inbetween. In 2012 his first stage play, Nice Sally, made it to the finals of the Off Cut Theatre Festival. He has also written a number of Doctor Who, Torchwood and Dark Shadows audio dramas. You can find him on Twitter @joelidster.

William McGeough trained at Drama Centre London. Theatre work includes The Representative and James Graham’s Little Madam (The Finborough Theatre), Romeo and Juliet (Playhouse Harlow), A Midsummer Night’s Dream and Marat/Sade (Punchdrunk), Spoonface Steinburg (National Tour) and one man show Mistaken; A Quartet of Plays for One Actor (Hidden Bell/Edinburgh Festival). He can be heard on audio plays A Family Affair (BBC Radio 4) and The Devil Cat (Big Finish) and has appeared on Skins (E4) and in short film M3LL155X directed by FKA Twigs and released alongside her EP of the same name. @woomcgoo

Sinead Phelps is an Actress who studied Drama and Theatre Arts at Goldsmiths, University of London. She is very interested in improvised theatre and is currently working in the Czech Republic with Prague Shakespeare Company, playing Juliet in a touring production of Romeo and Juliet. Recent theatre work includes How Brenton’s Anne Boleyn (The Stables Theatre) and Alan Ayckbourn’s Taking Steps in The Drama Group Theatre, Chicago.